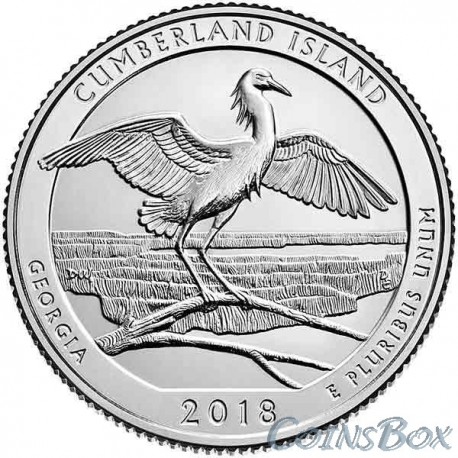 25 cents (a quarter) of 2018 from the National Parks series - the 44th National Coast of Cumberland Island.

Off the coast in southeastern Georgia is an unusual place - the Golden Islands of Georgia. Jellyfish swaying in the waves along the coast, the surf rustles, warm soft sand everywhere. Here live people who came from different parts of the world, speak different languages, have retained many of the customs of their dissimilar countries.

Cumberland, the largest and most southern of the Golden Islands, is located about 6 km from the mainland. 90% of its territory is occupied by a national park: ancient forests, pristine beaches, dunes, wide swamps and freshwater lakes. You can get to the island only by ferry. The US National Park Service limits the access of tourists to the island - no more than 300 people per day. There are no cars on the island.

Cumberland Island has been inhabited since ancient times. More than 4,000 years ago, the Indians lived on it, later Spanish missions and British colonial forts were located on it.

Since the 1750s On the island there were several plantations. According to legend, planter Robert Stafford burned down a quarter of his slaves alive after they refused to work for him, getting freedom. Places of old plantations are still visible on the island.

In 1783, the hero of the War of Independence, General Nathaniel Green bought land on the island, and his widow Catherine built a four-story house on it and gave him the name "Dungeness". In the early 1880s Gen. Green’s former estate was bought by Thomas Carnegie, brother of wealthy American industrialist, steel magnate Andrew Carnegie. The descendants of the Carnegie family still live on the island. Thomas Carnegie rebuilt Dungeness, transforming it into a stately 59-room Scottish castle with a swimming pool in the courtyard and a golf course. There were 40 additional buildings nearby. Until 1959, “Dungeness” was residential, but then there was a terrible fire that destroyed the building. Today, the ruins of the mansion “Dungeness” on the southern tip of the island is one of the attractions of the national park.

Another legacy of Thomas Carnegie on the island is the hotel "Greyfield" with white columns. It has only 20 rooms. It was built in 1901. It has preserved original furniture, portraits and memorabilia relating to the history of the Carnegie family.

Not far from Cumberland, outside the reserve, there are a number of places that are also attractive to travelers - the rest of the Golden Islands of Georgia. Jekyll Island: beaches, bike paths, golf courses, marinas. Darian Island: an old fishing town, the second oldest city in the state. It was founded by the Scottish Highlanders. Surrounded by rivers and swamps, the city of Darian shimmers in the sun with golden hues. For this feature, the island was called the "golden island". St. Simon Island: very rich people live in very rich ocean houses.

Obverse: In the center of the coin, the portrait of President George Washington is depicted to the left (shown in the restored version of the original portrait, used since 1932 on the coin-quarter). The top of the semicircle is the name of the issuing country: UNITED STATES OF AMERICA, the semicircle below shows the denomination of the coin - QUARTER DOLLAR. To the left of the portrait, the word LIBERTY (FREEDOM) is minted, to the right in several lines - IN GOD WE TRUST (WE BELIEVE IN GOD) and the letter of the mint.

Reverse: In the center, against the background of the Cumberland Islands, there is a snow heron sitting on a branch and ready to take off. On the left edge of the coin is the inscription: "GEORGIA" (Georgia), on the right - "E PLURIBUS UNUM". At the top of the semicircle the name of the national park is minted: "CUMBERLAND ISLAND" (Cumberland Islands). The year of coinage is indicated at the bottom of the coin: "2018".