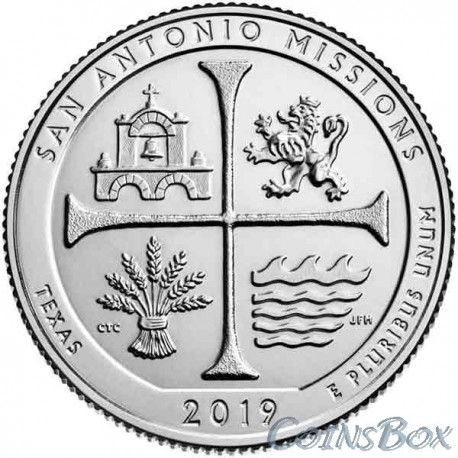 The historical park combines four of the five existing Christian missions operating in Texas on the banks of the San Antonio River from the 17th to the 19th centuries, during the Spanish colonization of the southwestern territories of the mainland. Ancient irrigation canals built at the base of the missions depart from the river. Missions disseminated Christianity among the indigenous population.

The mission buildings included in the historical park have a different degree of preservation and are bulky gray stone structures, the style of which betrays their religious purpose. Their architecture is a legacy of Spanish Baroque.

Mission Concepcion was founded by Franciscan monks in East Texas in 1716; in 1731 she moved to the city of San Antonio. The old mission building conveys the spirit of missionary life in the early 19th century. The restoration of the mission’s interior was completed in March 2010. A Catholic Mass is held here every Sunday.

In 1812, the first building of the Concepcion mission was completely destroyed by an earthquake, in 1822 it was rebuilt again. A long narrow church accommodated up to 1,000 people. Its uneven floors and strict ornament reflect the poverty and simplicity of missionary life. Near the church are barracks, a carpenter's shop, and a weaving mill, which made up the mission’s economic life. In the backyard, they ground grain and made soap from fat. Another mission building is a common sleeping quarters for unmarried Indian women converted to Christianity.

Reverse: The coin is made in the style of the Spanish rial of the colonial era. Inside the quarters are the signs of the ancient temple missions of the San Antonio Park. Ears of wheat symbolize farming and farming in parkland, and arches and a bell tower - a fortress, a community and a house. The heraldic stylized image of a lion recalls the Spanish cultural heritage. Waves are a symbol of the San Antonio River and crop irrigation methods widely used in the surrounding areas. The name of the state in which the park is located is minted on the left edge of the coin: "TEXAS" (Texas), on the right - the US motto: "E PLURIBUS UNUM". The name of the national park is minted in a semicircle: "SAN ANTONIO MISSIONS" (MISSIONS SAN ANTONIO). At the bottom of the coin is indicated the year of minting: "2019".