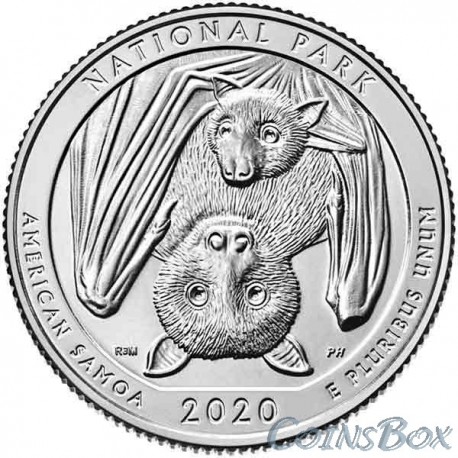 American Samoa - the few eastern islands of the Samoa archipelago in the Pacific Ocean - is a territory not included in the United States. The US government is custody of her.

The national park is located mainly on the three islands of the archipelago: Tutuila, Ofu and Tau. The park also owns part of the coastal waters. Each of the island parts of the park actually constitutes an independent entity, since each island has its own natural features.

Ofu Island is located 95 km east of Tutuila and 10 km northwest of Tau. It is known for coral reefs along its coast. Here diving enthusiasts seek. Here you can see 300 species of fish and 150 species of coral.

On the island of Tau, located 10 km south of Ofu, there is a rain forest in which a large number of species of birds live. The annual rainfall in rain forests is 2000–7000 mm or more; such a forest has a complex longline structure, many species of woody plants and vines. The coast of Tau also has a coral reef. The coast is decorated with cliffs and rocks, there is one volcanic crater. In general, the island of Tau itself, like other neighboring islands, is the remainder of a volcano subjected to severe erosion. The island has a triangular shape, its length is about 6 km, its width is about 10 km. The highest point of the island is Mount Lata (931 m), which is at the same time the highest point of all of American Samoa. Mount Lata is surrounded by rain forests and is located in the national park.

Prior to western colonization, the island of Tau was the spiritual capital of Polynesia.

The fauna of the national park is not rich. It contains 3 species of bats and 20 species of seabirds. Among the other birds are the Pacific fruit-eating pigeon (Ducula pacifica), putoto herd (Porzana tabuensis), multicolored motley pigeon (Ptilinopus perousii), and Samoan aplonis (Aplonis atrifuscus).

The plant world is more diverse. Most of the islands are covered in tropical rainforests. 487 species of flowering plants and ferns grow in the park. There are about 100 species that are not found anywhere else in the world.

Reverse: In the center of the coin field is a Samoan fruit bat hanging on a tree with its cub. The name of the state in which the park is located is minted on the left edge of the coin: "AMERICAN SAMOA" (American Samoa), on the right - the US motto: "E PLURIBUS UNUM". The name of the national park is minted in a semicircle: "NATIONAL PARK". At the bottom of the coin is indicated the year of minting: "2020".