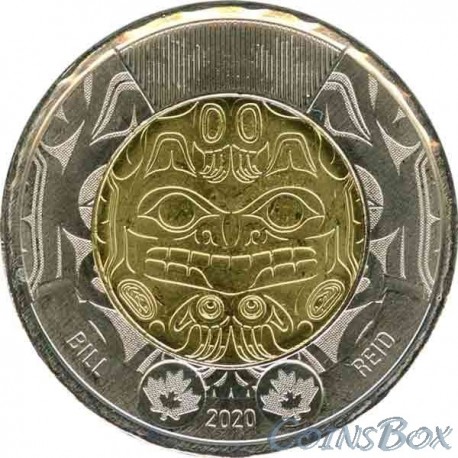 The drawing depicted on the 2020 $ 2 coin originally appeared on a ceremonial drum, one of several designed by Bill Reed. Xhuwaji / Hyde's Grizzly Bear was adapted for silkscreen reproduction, and copies were sold to raise money for the Artists for Kids project. The original drum is part of the permanent collection of Artists for Kids.

Xhuwaji (Grizzly Bear) was Bill Reed's favorite character and he used it frequently in his jewelry designs and sculptures. Xhuwaji is an important symbol among the Haida people and plays a significant role in the ancient stories of Haida.

The Hyde people's symbol for the Grizzly Bear has evolved since Reed created the Xhuwaji / Hyde Grizzly Bear. Today the word for grizzly bear is spelled Xhuwaji. This is because the spelling and phonetic structure of Haida has been improved in recent decades through efforts to revitalize the language by community members, especially elders, through the Skidegate Haida Immersion Program (SHIP).

Reverse: depicts "Xhuwaji / Hyde Grizzly Bear" by renowned artist of the Hyde people - Bill Reed on the inner core of the coin and extends to the outer ring. At the top of the outer ring, two maple leaf images appear in a linear pattern. The banner at the bottom of the outer ring bears the words "BILL" and "REID" in honor of the 100th birthday of the artist Haida, while the year of issue "2020" is centered between two safety signs that consist of a maple leaf inside the other maple leaf.