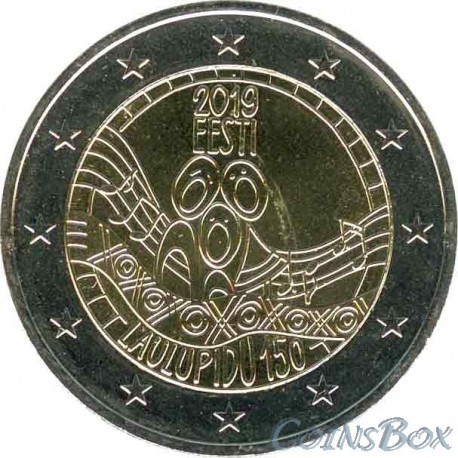 Estonian Song Festival (Est. Üldlaulupidu) is a national and national singing festival, where various choirs and brass bands take part. The festival is held every five years on the territory of the Tallinn Singing Field. The celebration is organized by a unit specially established for this purpose under the Ministry of Culture of Estonia. It is the object of the fund of masterpieces of the oral and intangible cultural heritage of UNESCO.

Between the two world wars, the holiday was held 4 times. In 1923, during the celebration of the eighth time, the tradition began to be held every five years. Since 1928, the festival has been held on the Tallinn Singing Field. From the 8th to the 11th holiday, the organizer was the Estonian Singers Union. In 1943, due to World War II, the celebration was canceled. At the moment, this is the only case when the holiday was not held.

Reverse: The map of Europe is located on the right side. The background of the map shows six vertical lines. There are 12 stars at the ends of these lines. To the left of the card is a numerical denomination. On the map itself is a horizontal inscription “EURO”.

Obverse: in the outer circle - traditional EU stars
in the inner circle in the center a relief stylized image of a singing trio is minted, from which notes symbolizing a song scatter in different directions.
inscriptions in the domestic segment from above the country issuer - “EESTI”, year of issue “2019”, from the bottom “LAULUPIDU 150”.