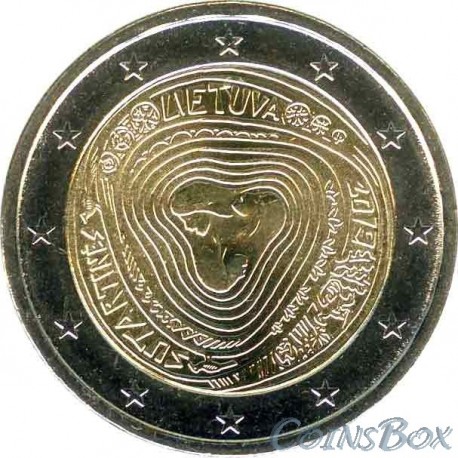 Reverse: The map of Europe is located on the right side. The background of the map shows six vertical lines. There are 12 stars at the ends of these lines. To the left of the card is a numerical denomination. On the map itself is a horizontal inscription “EURO”.

Obverse: In the center of the coin, three female profiles are depicted, from which concentric lines depart, symbolizing the polyphonic melodies of Lithuanian folk songs (sutartines). The name of the issuing state “LIETUVA” is engraved on the top, and the word “SUTARTINES” is on the left. To the right are the signature of the designer of the “LP” coin, the year of issue of the “2019” coin, and the mint mark. There is also a pattern for national motifs. On the outer ring are 12 stars of the European Union.