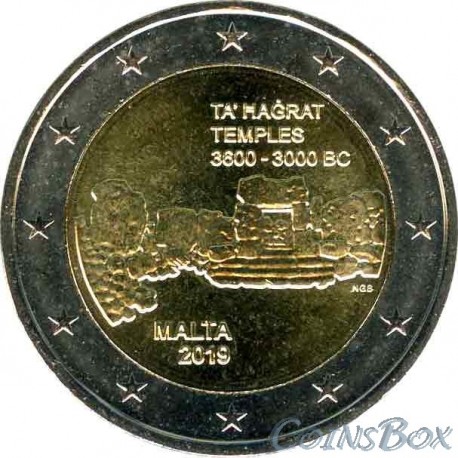 The megalithic temple of Ta ’Hajrat is located near the Maltese town of Mjarr. He, like other similar ancient structures of Malta, is under the protection of UNESCO. With its structure and construction time, the megalith Ta ’Hajrat resembles the Sorrow temple complex, which is nearby. Ta ’Hajrat Temple is considered one of the most ancient religious buildings on Earth. Scientists do not know who and how built this and other megalithic temples. It is known that this happened in the Neolithic era. The complex consists of two different temples adjacent to each other. A larger one was built between 3600-3200. BC e., and the smaller appeared later - in 3300-3000 years. BC e. The study of the complex began in the first half of the 20th century. Excavations took place under the direction of the director of several Maltese museums, Sir Temi Zammit. A second study of megalith was conducted by John Davis Evans in 1954 and British archaeologist David Trump in 1961. Trump was able to accurately determine the time of construction of the temple complex. By 1937, part of the megalith was restored. Then the researchers discovered an interesting artifact - a small volumetric copy of the Ta ’Hajrat temple made from local coral limestone. From the same breed, which was the most popular building material in Malta, the temple complex itself was built. In addition, fragments of ceramics were found here, from which it was possible to find out that people once lived on the site of the megalith, that is, there was once a village here. All significant artifacts were placed in the capital's museum. Ta ’Hajrat Temple is open for inspection.

Obverse: the map of Europe is located on the right side. The background of the map shows six vertical lines. There are 12 stars at the ends of these lines. To the left of the card is a numerical denomination. On the map itself is a horizontal inscription “EURO”.

Reverse: 12 stars of the European Union are depicted on the outer ring of the coin. In the center, a fragment of the Ta ’Hajrat temple is depicted. Just above the image, on the right, the inscription: "TA’ ĦAGRAT TEMPLES 3600-3000 BC ". At the bottom of the image is the inscription: "MALTA 2019".