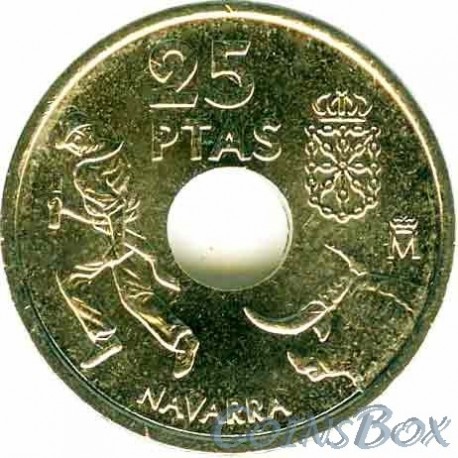 Kingdom of Navarre is a medieval kingdom. It was originally called the Kingdom of Pamplona. It consisted of lands on both sides of the Pyrenees near the Atlantic Ocean - the modern province of Navarre in northern Spain and the Atlantic Pyrenees in modern southern France. The kingdom has existed since the beginning of the 9th century (originally as a county). In 1513 South Navarra was conquered by King Ferdinand II of Aragon the Catholic and became part of the Kingdom of Spain. Northern Navarre remained independent until 1589, when its king Henry III de Bourbon became king of France under the name Henry IV, after which the kingdom of Navarre was annexed to France (finally in 1620).

UNC from the bank roll.