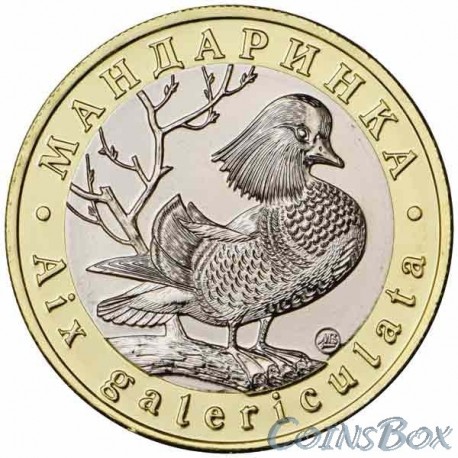 Mandarin duck is one of the most beautiful birds that nature has created. It belongs to the duck family. This bird is small: it weighs 400 - 700 grams, and its wingspan is about 70 cm.

Of course, the mandarin duck attracts attention primarily due to its unique color. The male's head is adorned with three colors - orange, red and white, and the center of the crown is covered with red-purple feathers. Males have a special pattern on their heads, so the colors are not in a chaotic order. The color of females is more modest: they have gray and white wings.

Both females and males have a red beak with a rather sharp white tip and claws on their legs, which is not inherent in any other member of the duck family. These birds are unpretentious to food, they feed on algae, molluscs, seeds, small fish.

In Russia, the mandarin duck lives in the Far East. Here she can be found on Sakhalin, in the Primorsky and Khabarovsk Territories, as well as in the Amur Region. Interestingly, here she is only in the warm season, and for the winter, the mandarin duck flies to China and Japan.

Mandarin duck inhabits mountain rivers and riverside forests. She easily gains altitude and maneuvers well in the air. Mandarin duck loves to swim, but dives only when necessary. Mandarin duck nests are created in secluded places.

These birds are monogamous: they choose one partner for life and always stick together. Perhaps that is why the mandarin duck is considered a symbol of loyalty in Chinese culture. They even decorate the wedding room with their figures and give them as a talisman to newlyweds.

The male tries to attract the female with his bright color, as soon as he manages to win her heart, the couple gives birth to offspring. The female incubates eggs for about a month, at which time the male obtains food for the female. When ducklings are born, they easily jump out of the nest, but the parents carefully protect their offspring until they become completely adults. After a month and a half, babies can already fly, and after two months they gain complete independence. Mandarin duck live for about 7 years.

Residents of the Far East treat the mandarin duck with special trepidation, because it is listed in the Red Book of Russia. In addition to its natural habitat, the bird can be found in reserves and parks.