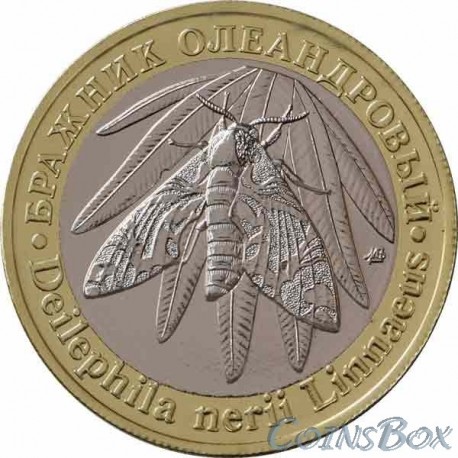 The oleander hawk moth is a large butterfly, its wingspan is from 9 to 11 cm. A beautiful green, sometimes pink color with violet hues gives it a unique, some kind of exotic beauty. This is no coincidence: the oleander hawk moth is a southern species known from southern Europe, Africa, and India. In the CIS, it lives on the territory of the Crimea and the Caucasus, in the Crimea only in the strip of the South Coast. Included in the "Red Book".

A butterfly of this species flies beautifully, overcomes mountains, sometimes flies from the south into Central and even Northern Europe. Some stray individuals were found in Russia, near St. Petersburg.

The caterpillar of the oleander hawk moth is beautiful: it is yellow-green; on the sides along a white longitudinal stripe, behind the head there are two blue spots with a black frame. The caterpillar feeds mainly on oleander leaves.

The pupa, brownish-red with a dark pattern, is placed in a loose cocoon in the ground under fallen oleander leaves.

In Crimea, although these butterflies are fed, they die out in cold winters. The reasons for the low number have not been clarified in detail. There are practically no security measures. In general, for such rare species as the oleander hawk moth and the “dead head”, only artificial breeding with subsequent release into nature can be an effective measure of population recovery. It should be considered unacceptable to collect butterflies and caterpillars of these species in nature, including for collecting.