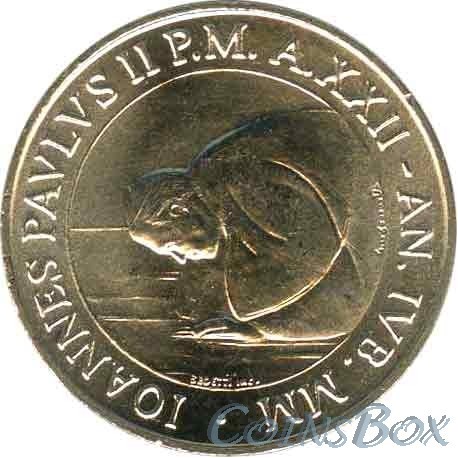 Beatified on May 1, 2011 by Pope Benedict XVI. Canonized on April 27, 2014 by the Pope of Rome Francis and his father, Benedict, who served him.

In 1978, 264th Pope John Paul II became the first Roman pope of non-Italian origin to be elected over the last 455 years (Adrian VI, who became pope in 1523, was Dutch by birth), one of the youngest pontiffs in history and the first pope of Slavic descent . However, there is a version that John Paul II was the second Slavic pontiff: perhaps the first pope of Slavic origin was Sixtus V, his father Srechko Perich was from Montenegro].

According to the duration of his pontificate, he is second only to the Apostle Peter and Pope Pius IX (1846-1878). The successor of John Paul II was the German Cardinal Joseph Ratzinger, who took the name of Benedict XVI.

Obverse: The center depicts Pope John Paul II. On top of the semicircle is the inscription: IOANNES PAULUS II P.M.A.AXII-AN.IVB.MM.

Reverse: The coat of arms of Pope John Paul II is depicted in the center, the denomination of the coin is L • 50. Above the edge of the coin a semicircular inscription - CITTA 'DEL VATICANO

The last year of coinage of coins of this type.