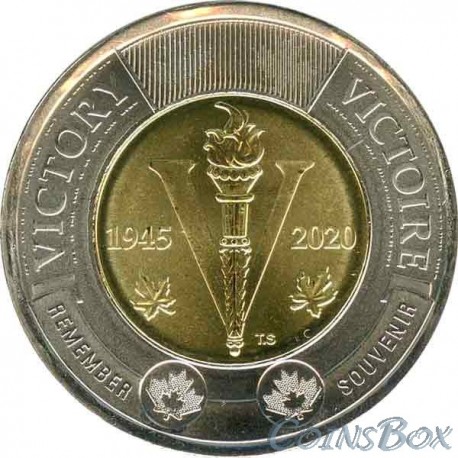 The Royal Canadian Mint has announced a bimetallic common coin to commemorate the 75th anniversary of the end of World War II. The second issue is 15,000 rolls of 25 coins each with selective coloring

Reverse: On the inner core, in the center, there is a burning torch embedded in the Latin letter “V”, which is interpreted in two meanings, as the face value of the coin “5” and, as a sign of victory “Victoria”; to the left the year of victory is "1945", and to the right of the torch the year of issue is "2020". The victory emblem is framed with maple leaves, and the double dates "1945" and "2020" mark the 75th anniversary of the end of World War II. At the top of the outer ring, two more maple leaf images appear inside the linear pattern. The words "VICTORY" and "VICTOIRE" are framed by an inscription in the international language (Morse code) - "WE WIN WHEN WE WORK WILLINGLY" / "LA BONNE VOLONTÉ EST GAGE ​​DE VICTOIRE". The inscriptions on the circumference of the outer ring at the bottom - "REMEMBER" / "SOUVENIR", also accompany the image of two maple leaves.