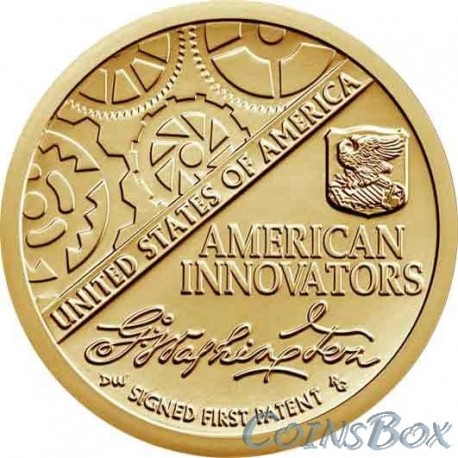 The first patent for a period of 14 years was signed by President George Washington and received on July 31, 1790 by Samuel Hopkins from Vermont on the process of producing potassium carbonate, used as fertilizer and for the production of soap.

Obverse: The Statue of Liberty is shown in profile in the center, to the left of which is the official US motto "We believe in God" ("IN GOD WE TRUST"), to the right is the face value of the coin "$ 1" ("$ 1"). At the bottom of the obverse are the initials of the designers "JK" and "PH".

Reverse: The field of a coin is visually divided into 2 parts by a diagonal line on which the name of the issuing country is minted: "United States of America" ​​("UNITED STATES of AMERICA"). In the upper left are images of stylized gears symbolizing US industry and innovation, and in the right are the autograph of President George Washington, the name of the entire American Innovation coin series ("AMERICAN INNOVATORS") and the name of the coin itself: "The first signed patent" (" SIGNED FIRST PATENT "). Also on this part of the coin at the top right is a sign in the form of a shield, on which the eagle is depicted on various instruments, at the bottom - the initials of the designers "DW" and "RG".

Edge: Smooth with the inscription (* In God We Trust * E Pluribus Unum * year of minting and mint stamp).

The United States Mint launches a $ 1 (one dollar) coin program. A new multi-year series in honor of American innovations and innovators. The issue of coins of 1 dollar will be for each of the 50 states, the District of Columbia and five US territories - Puerto Rico, Guam, American Samoa, US Virgin Islands and Northern Mariana Islands, as well as the 2018 introductory coin - the first patent.

Four new one-dollar coins with distinctive reversible designs will be produced 4 pieces each year from 2019 to 2032 in the order in which the states ratified the United States Constitution or were admitted to the Union. After issuing coins for each of the states, coins will be issued for the District of Columbia and the territories.