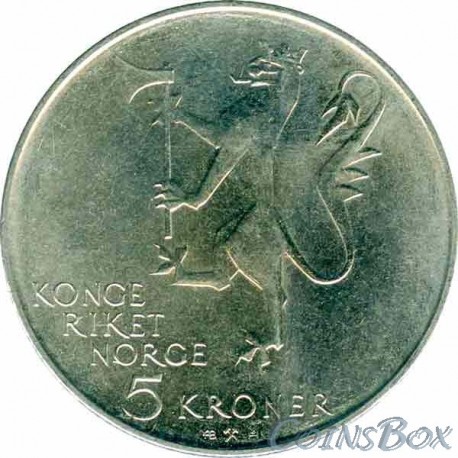 The Armed Forces of Norway are the aggregate of the troops of the Kingdom of Norway designed to protect the freedom, independence and territorial integrity of the state. Consist of ground forces, naval forces, air forces and territorial defense.

Obverse: In the central part there is a Norwegian heraldic lion. To the left and below it is an inscription in Norwegian in 4 lines: "KONGE RIKET NORGE 5 KRONER" - King of the Kingdom of Norway, 5 kronor. Below, near the edge, the letter of the Kongsberg mint is a crossed hammer and a pick.

Reverse: In the central part of the monogram of the King of Denmark and Norway Christian IV Adolf and King of Norway Olav V, separated by a sword. Below them are the dates: 1628 - 1978, indicating the year of foundation of the Norwegian armed forces and the year of minting, respectively. Above, near the edging, there is an inscription in Norwegian: "HÆREN" - army.