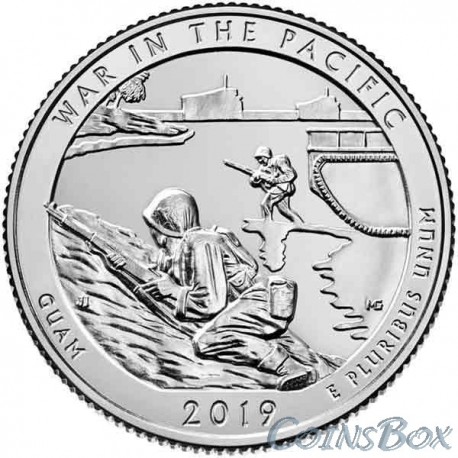 25 cents (quarter) 2019 from the National Parks series - the 48th National Monument of Military Valor in the Pacific Ocean. state of guam.

The westernmost park of all US national parks, the Guam War in the Pacific National Historical Park honors the courage, courage, and sacrifice of those involved in Pacific Theater hikes during World War II. The park also preserves and interprets many of the amazing resources found on the island of Guam. The war in the Pacific National Historical Park has the highest biological diversity of any national park with underwater and terrestrial areas.

Reverse: In the center, American troops are shown landing on the shore of Asan Bay, thereby reinforcing the number of troops on the island in the struggle for Guam and its final liberation. The name of the state in which the park is located is minted on the left edge of the coin: "GUAM" (state of Guam), on the right - the US motto: "E PLURIBUS UNUM". The name of the national park is minted in a semicircle: "WAR IN THE PACIFIC" (WAR ON THE PACIFIC). At the bottom of the coin is indicated the year of minting: "2019".