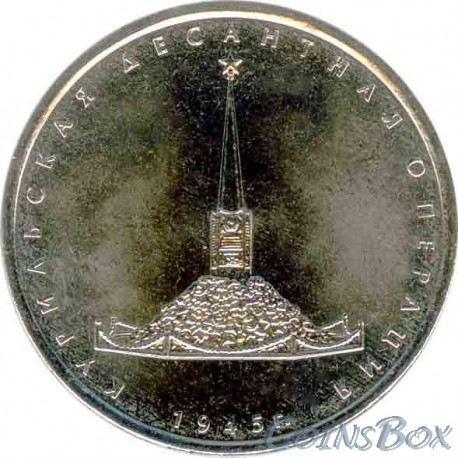 The Kuril landing operation of 1945 was an operation of the 2nd Far Eastern Front (General of the Army M.A.Purkaev) and the forces of the Pacific Fleet (Admiral I.S.Yumashev), carried out from August 18 to September 2 during the Soviet-Japanese war of 1945.

In memory of the Soviet soldiers who died during the operation, monuments were erected in the cities of Petropavlovsk-Kamchatsky and Yuzhno-Sakhalinsk.

Obverse: in the center - denomination: "5 RUBLES", below - the inscription: "BANK OF RUSSIA", under it - the year of issue "2020", on the right at the edge - the mint's trademark, on the left and right - a stylized branch of a plant.

Reverse: a relief image of the "Monument to the soldiers of the Soviet Army - the liberators of the Kuril Islands in 1945"; along the edge there are inscriptions: "KURIL'SKAYA AMBORING OPERATION" and "1945".