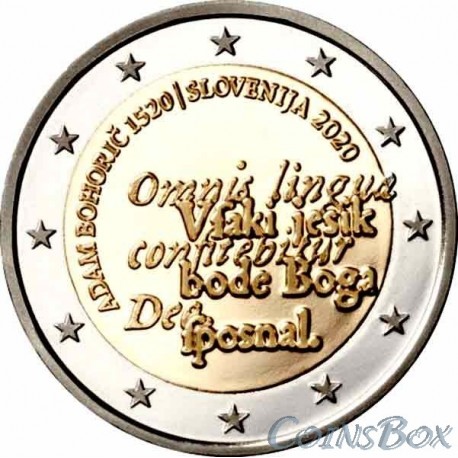 Slovenia issues 2 euros "500th anniversary of the birth of Adam Bogoric". Philologist, public figure, participant of the Reformation, one of the leaders of the Protestant movement Adam Bohoric is considered the founder of the literary Slovenian language. In 1584, Adam Bohoric wrote Articae horulae succisivae in Latin, which became the first grammar of the Slovene language.

Obverse: The design is based on a multilingual motto taken from the cover of Bogorich's Latin-Slovenian grammar called “Proste zimske urice”. The slogan in Slovenian, written in "Godoric" (a type of letter named after the founder) is in the center. At the top, the reason for issuing 2 euros is prescribed - "ADAM BOHORIC 1520 / SLOVENIJA 2020".

Around the outer ring are 12 stars of the European Union flag.

Reverse: the map of Europe is located on the right side. There are six vertical lines in the background of the map. There are 12 stars at the ends of these lines. To the left of the card there is a numeric denomination. On the map itself there is a horizontal inscription “EURO”.