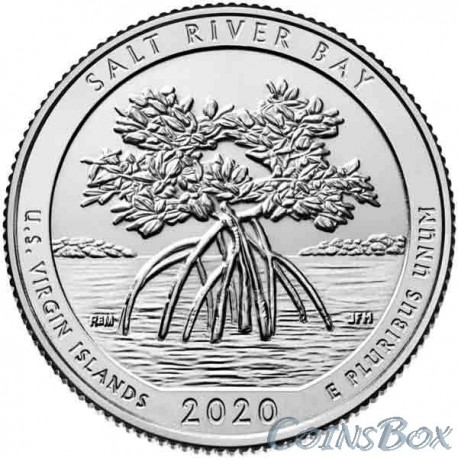 Salt River Bay National Park is located on St. Croix Island. In 1493, the expedition of Christopher Columbus, who discovered the American continent, landed on it. The landing site is located in the park.

The Virgin Islands were named by Columbus as the Once mil virgines. Over time, the name was truncated, and the islands began to be called simply Virginian (or, if you translate the name into Russian, Maiden).

From the moment Columbus arrived, the tragic history of communication between Europeans and the indigenous population of America begins. 24 members of the expedition sent to search for fresh water returned with their booty - several captive women and boys from the local tribe. Their fellow tribesmen, armed with arrows, arrived to the aliens in a canoe, a battle ensued, and some of the captives were freed. The only living trophy of the sailors was a young Indian woman, which Columbus presented to his fellow countryman Michele Cuneo.

16 years after the appearance of Columbus, the Europeans established contractual relations with the Caribbean tribes, some of which converted to Christianity. However, Spanish entrepreneurs did not disdain to take the Indians into slavery. For example, in 1510, a certain Diego de Nicuesa raided the island of Santa Cruz and captured 140 aborigines.

Since the 17th century. the process of active colonization of the island began. During the European development, the flora and fauna of the Virgin Islands was largely destroyed. On the island of Santa Cruz, there were once about 200 plantations of sugarcane, founded by the Danes, many of them survive to this day.

In the national park, sea and land, a bay, coral reefs and an underwater canyon, a mangrove forest and more than ten archaeological sites convey the pristine nature of the Virgin Islands and the history of several centuries of European presence.

Since the 17th century. the ruins of an earthen fortification built by the Dutch - the Flemish Fort (Fort Flamand) - have been preserved in the park.

Today the park is in the stage of formation. There are no organized campsites and accommodation on its territory; there is one small private campground.

Obverse: In the center of the coin there is a portrait of President George Washington left (shown in a restored version of the original portrait used since 1932 on coin-quarters). Above, in a semicircle, the name of the issuing country: UNITED STATES OF AMERICA, below in a semicircle is written the denomination of the coin - QUARTER DOLLAR. To the left of the portrait the word LIBERTY (FREEDOM) is minted, to the right in several lines - IN GOD WE TRUST (WE BELIEVE IN GOD) and the letter of the mint.

Reverse: In the center of the field of the coin, the characteristic red mangrove tree is depicted, which is shown at an early stage of its growth. Mangroves are shrubs that grow in salt water. They figured out how to make fresh water from salt water: their roots contain a special substance that retains salt, and thus the sea water is filtered. There are 70 types of mangroves in the world. The authors of the design wanted to draw attention to the extinction of mangrove forests and the loss of unique wildlife that can breed in salt water. On the left edge of the coin is minted the name of the state where the park is located: "US VIRGIN ISLANDS", on the right - the US motto: "E PLURIBUS UNUM". At the top, the name of the national park is minted in a semicircle: "WEIR FARM". The year of minting is indicated at the bottom of the coin: "2020".