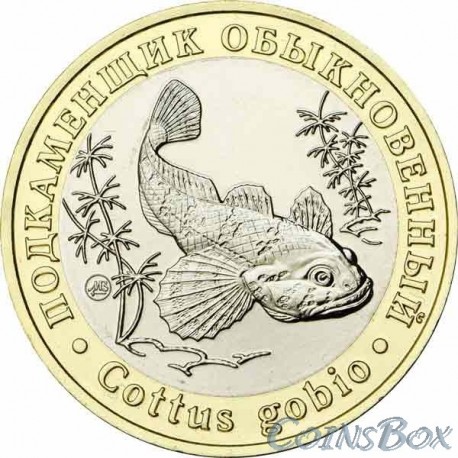 Common sculpin is an inhabitant of clean fresh waters. It is found in small rivers or clear lakes. Selects a rocky bottom. The reservoirs inhabited by the common sculpin are notable for their shallow depth. This is a lone fish, which is almost never seen even in small schools. Their favorite habitats are rocky spaces.
It can grow up to 20 centimeters in length. It has a relatively large head, which is somewhat wider than the body itself. It features a large mouth and massive lips, as well as large eyes, with a red tint. There are no scales on the body, but small, but rather sharp spikes are placed throughout the body to protect against enemies. In this regard, few of the predators dare to feast on such a prickly prey.
It has elongated pectoral fins covered with small dark spots. In the area of ​​the gills, there are protective shields covered with the same thorny spines. The back of the sculpin is painted gray-yellow with brown spots and stripes. This allows the fish to remain unnoticed against the background of stones, which is an effective defense against its natural enemies.
Scaffolds are widespread throughout Europe, Asia and North America. Fish give preference to clean lakes, fast-flowing rivers, as well as small streams, where there is a fast current.
The common sculpin is a skilled hunter. Before lying in ambush, waiting for the approach of potential prey, the predatory fish muddies the water with its powerful pectoral fins. Clouds of silt, which rise from the bottom, cover the body of the sculpin and at the same time attract the attention of other creatures. As soon as the prey approaches such a shelter, the predator makes a lightning throw with its wide mouth. What does the common sculpin eat? The predator's daily diet includes the following: Tadpoles. Insect larvae. Caviar of fish and frogs. Fry. Small fish.
The sculpin is a traditional prey for other, larger predatory fish. Pike and perch love to hunt representatives of the species.
Also, the sculpin often becomes the prey of grayling, burbot. Some mammals feed on this fish, in particular, otters and minks. As for a person, fishermen prefer to send a scavenger caught in a net or on a hook back into the reservoir. After all, the size of the fish is very small. In addition, the stonefoot meat has a pronounced muddy aroma. When eaten, the fish is not very tasty.
Despite the fact that this species is widespread practically throughout the territory of Russia, its number is decreasing everywhere. The common sculpin is very sensitive to various kinds of pollution. Therefore, it may well be an indicator of the purity of the water.